...It took her two days to convince her husband, and the house really wasn't perfect at all. It just had perfect bones and fields — and two barns (though one was falling apart.) Before they closed on the sale, Rosenberg brought in Janet Lasley of Lasley Brahaney Design and Construction, 860 State Road, whom she had met when Lasley was working on a house across the street on Cherry Hill Road. According to Rosenberg, the farmhouse had been moved farther back from the road from its original location. (Today, as you drive up the driveway, you first pass the home of David Crane, CEO of NRG Energy, and his wife, Isabella de la Houssaye, which shares the same address as Meadowgate. If you go on the tour, keep driving all the way to the back.)

Rosenberg says the house was very chopped up, with lots of walls, small windows, and no porches. "Janet walked into the living room, and said, 'It would be great if we could raise the ceiling. Then she took a car jack or something and went — boom — and shoved the jack right into the ceiling." Then Lasley deadpanned in her signature no-nonsense way, "OK, I don't think we can raise it."

Though they did bring in other architects to bid on the project, the Rosenbergs ultimately stayed with Lasley Brahaney. Marc Brahaney, Lasley's husband and the architect of the firm, was the only one, says Rosenberg, who had the brilliant idea to remove one of the two staircases, thus opening up the plan of the first floor significantly. The six months of renovations commenced in January, 1996, during which time the Rosenbergs lived in a modular home attached to the house by a wooden plank walkway.

As part of the extensive renovations, Lasley Brahaney installed French doors from the dining room to the deck and did the same for the living room, creating a seamless view of the farmland from both rooms. Signs of the Rosenbergs' love of eclectic art, antiques, and world travel abound. The living room features a collection of Kenneth Southworth Davies trompe l'oeil still lifes on the wall. Aset of Honore Daumier classic satiric lithographs, gifts to Dr. Rosenberg, depicting an unscrupulous, flattering swindler and profiteer in a medical setting, sits on the fireplace mantel. Of note are a grand piano and a French cupboard dating to 1680. Katie Eastridge of Eastridge Design, 6 Highland Road, Princeton, was the interior decorator.

In the front entry hall, where Winston, the Rosenberg's Australian shepherd dog, likes to greet visitors, a contemporary, handcarved ceramic vessel by sculptor Gretchen Ewert depicting African leopards riding antelopes sits atop an antique American table, circa 1775. In the den, the fireplace mantel is a slab of limestone on which sits a collection of early 20th century Navajo clay pots and an antique weathervane in the shape of a horse. Navajo saddle blankets hang here and throughout the house, a collection started when the Rosenbergs bought a third home in New Mexico (they kept the Guilford, CT, house as a summer home). Displayed in the den is an old stone gargoyle head from an English cathedral built in the early Middle Ages.

Off the kitchen are a mudroom and Rosenberg's office (a room that was added to the house in the late 1800s). The walls of the mudroom and downstairs bath are peacock blue created with encaustic painting, also known as hot wax painting, which involves using heated beeswax to which colored pigments are added. In the office are several Navajo rugs and a small oil painting by the Pueblo Indian Albert Looking Elk Martinez dated about 1915. A 1790 French dining table serves as Rosenberg's desk, on which is perched a framed photo of a red-footed boobie (yes, that's a bird) that Rosenberg took on a recent trip to the Galapagos.

The master bedroom upstairs has vaulted ceilings and overlooks the fields. The room has an antique physician's cabinet and a customcrafted four-poster bed. The bed and chest are made of tiger maple. Nineteenth- century Japanese Hiroshige wood block prints and an old, Russian icon adorn the bedroom walls. The master bathroom was once a bedroom. It now has a large, walk-in shower and tub. On the subway tile walls are displayed a large wall hanging from Botswana and little animals from the Galapagos, Turkey, India, and Africa.

In 1997 the Rosenbergs replaced an aging barn with an early 19th century barn purchased through the New Jersey Barn Company and reconstructed by Lasley Brahaney.

Meadowgate's 120 alpacas are housed in the property's two barns. In 1997 the Rosenbergs replaced one deteriorating barn with an early 19th century structure that once stood on the Kirkbride Farm in Newtown, PA. The Rosenbergs bought the hand-hewn beams and internal pieces from the New Jersey Barn Company and hired Lasley Brahaney to reassemble the skeleton while designing space for female alpacas, the farm's office, and an apartment. The barn now has solar panels on its roof. Lasley Brahaney also put on an addition to the barn to serve as Meadowgate's main office. Literally undreds of red and blue ribbons the Rosenbergs' alpacas have won adorn the walls. 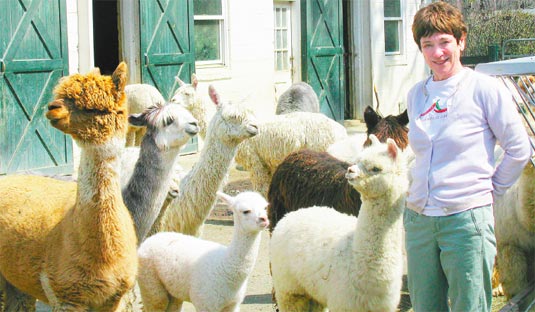 So, what about those alpacas? "I wanted to raise something: we had two barns and fields. The previous owner had kept horses. And we had a farmland assessment that we didn't want to lose," says Rosenberg. "Someone at Bristol- Myers Squibb told me about alpacas and an alpaca farm in Stockton, and said they were easy to take care of. They aren't huge and don't have all sort of ailments like horses do, and they come when they are called, unlike cows." Rosenberg visited the Stockton farm and bought two females (one pregnant) and two geldings.

"They were so easy to take care of. I took care of them myself," says Rosenberg. "I thought, I could have more, so every time my husband would go out of town, I would get a couple of new ones, and I'd wait to see how long it took him to notice. It was textbook simple to deliver a baby. So we got herd sires (kept in a separate pen), and started going to alpaca shows. First we sold one or two, and it went from there. The money is in raising and selling the animals, not the fleece. It just started rolling along."

As Meadowgate's alpaca population started to grow, it became clear Rosenberg would need help. She hired Rich Maurer, who had worked as construction manager for Lasley Brahaney and wanted to move on from construction. When the Rosenbergs purchased another farm, a 20-acre property in West Amwell, Maurer became the facilities manager, and his wife, Tammi, became Rosenberg's personal assistant and helper on the farms. The Maurers then built a house on the West Amwell farm.

The connections between the Lasley-Brahaneys and the Rosenbergs are indeed deep-seated. While working on the Rosenberg project, in November, 1997, just after the birth of her second child, Lasley was diagnosed with leiomyosarcoma, an extremely rare form of cancer. "When Leon heard about it," says Rosenberg, "he realized how serious it was right away and helped her plan initially what kind of treatment she would have and where she would go." Lasley, who was profiled in the February 13, 2008, issue of U.S. 1, lived a remarkable 12 more years (she died on May 13, 2010), while those with her type of cancer typically die within a year or two.

"They were practically family by this time," says Rosenberg. "The irony was that when my daughter was 16, she got Hodgkin's lymphoma. One day she said, 'dad, I have this knot in my neck,' and the next day we were at CHOP (Children's Hospital of Philadelphia). Years ago that would have been a death sentence, but she was very early stage. Through her junior year in high school, she had chemotherapy and radiation. We knew she was going to get better.

"Before Alexa even started chemotherapy, Janet came into the house and said, 'OK, Alexa, I'm going to show you what cancer looks like,'and she pulled off the wig, and she was totally bald. I'm not quite sure if this was a good thing or not but Alexa took it quite well. She never missed a day of school, which we did so she could have a sense of normalcy. She took it all in stride." Alexa went on to Brown and earned a master's in international urban studies at MIT. Her husband is from Senegal, and they have one son. They live in the Washington, DC, area, where Alexa works for HUD. (Their wedding was featured in a cover story in U.S. 1, March 17, 2010.)

One of the Rosenbergs' three cats, Mathilda, is a kitten from a litter of one of Lasley's cats. And on the half wall of the open kitchen sits a framed photograph of two of the Rosenbergs' alpacas, taken by Lasley. Rosenberg picks up the frame, looks at it for a moment, and says, "Janet used to come over and swim. After she got sick I felt like, if she ever died, she'd still be right here in the house with me — and she is."

As I walk back to my car, the first big slow drops of a spring shower moisten the ground. I look over my shoulder at the broad green fields, which are now completely empty, affording an uninterrupted view of the pond. The alpacas have ambled up to the barns to get out of the rain. I peek over the fence in the side yard at the small but elegant heated lap pool, where Rosenberg swims an hour a day year-round. It is surrounded by a handsome flagstone terrace and a pergola with climbing flowering vines. I can just picture Lasley, an avid swimmer (her mother owned Princeton Aqua Sport and Lasley was SCUBA-certified), doing the backstroke, her wet blonde head poking out of the water, and calling out, "Come on in, the water's fine."